In this essay I argue that in her play Venus, Suzan-Lori Parks complicates the notion of the gaze to shift power away from the manifold viewers witnessing Baartman’s display (both the contemporary audience and the audience built into the play), and this creates a space for Baartman to exist without the burden of having to be representative. In the play, Baartman articulates her experience and gives voice to the pain underscoring it. In essence, Parks constructs an audience that is prepared to see Baartman as a black woman rather than as the black woman.

This piece makes the case that Toni Morrison’s Song of Solomon and Jamaica Kincaid’s The Autobiography of My Mother inspire a rethinking of what it means to write (or write about) the black female body. By creating figures who elude definition and categorization, both writers imagine black womanhood in a way that places notions of black female bodies and identity outside of generally accepted ideology of race and gender. This creates a sense of boundarylessness that allows for various movements, particularly between male and female, self and other, even life and death. 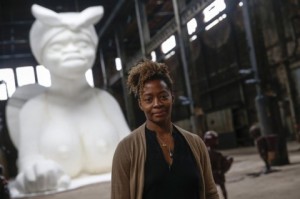 Very proud to have contributed to the infopacket for the July 5 Free University event at Kara Walker’s A Subtlety exhibition. I attended on June 22 along with other people of color for the “We Are Here” gathering.  Below are a few informative links:

Kara Walker’s A Subtlety or The Marvelous Sugar Baby: http://creativetime.org/projects/karawalker/